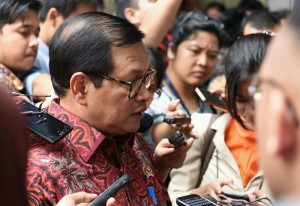 Cabinet Secretary Pramono Anung asserted that the Government truly hopes that the draft of the Law on Tax Amnesty can be immediately finalized.

According to Pramomo, amidst the global economic turbulence and given the budget deficit that is likely to happen, it is hoped that the draft of the law on tax amnesty can be immediately finalized.

The Government believes that the House of Representatives (DPR) also has the same goals. Its not about the Governments interests but the interests of the Indonesian people as a whole, Pramono said to reporters before a limited cabinet meeting at the Presidential Office, Jakarta, on Wednesday (24/2).

Pramono made the statement in response to the unwillingness of a number of fractions at the DPR to immediately deliberate the draft of the tax amnesty law after the deliberation of the revision of Law Number 30 of 2002 on the Corruption Eradication Commission (KPK) was postponed, as agreed in a consultative meeting between the Government led by President Joko Widodo with leaders of the DPR-RI at the Merdeka Palace on Monday (22/2).

Hendrawan said that the reason to postpone the deliberation is because the draft of the law on Tax Amnesty has to be disseminated to the public first.

We agree that caution is needed. This is what the President hopes. To formulate a law, we have to carefully prepare the concept. It takes enough time so it can be disseminated well, Hendrawan was quoted as saying by www.kompas.com on Wednesday (24/2).

For the record, tax amnesty is a limited-time opportunity for a specified group of taxpayers to pay a defined amount, in exchange for forgiveness of a tax liability (including interest and penalties) relating to a previous tax period or periods and without fear of criminal prosecution.

Pramono further said that the aim of the draft of the law on Tax Amnesty is to increase state revenues and said that if the budget is in a healthy condition, the Government will be able to build better infrastructures, which in turn will bring benefits for the people.

We do hope to build a healthy budget so we have more rooms for development as expected by President Joko Widodo, Pramono said. (FID/ES) (EP/YM/Naster)