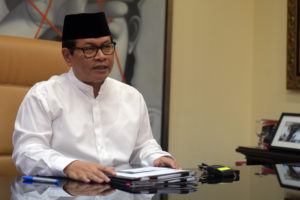 Cabinet Secretary Pramono Anung has conveyed his deepest condolences over the passing of the third President of the Republic of Indonesia Prof. Dr. Ing. Bacharuddin Jusuf (B.J.) Habibie.

Habibie passed away at the age of 83 on Wednesday evening at 18.05 at Gatot Subroto Army Hospital in Central Jakarta after receiving intensive treatment since 1 September 2019 at the hospital following his deteriorating health condition

During his short-term presidency—only 16 months became the shortest in the country’s modern history—, Pramono said that Habibie had left numerous legacies, including democracy, freedom of the press, technology, human resources, innovation, inspiration, and more.

“We deeply lost a figure who has given great contributions to the country and the state,” Pramono said, adding that Indonesia is thankful for what Habibie had done to the country.

Born on June 25, 1936 in the small town of Parepare in the eastern province of South Sulawesi, Habibie served as Minister of Research and Technology for twenty years in the administration of late President Soeharto. Habibie was then appointed as president following the resignation of President Soeharto in May 1998 and served in the role until elections were held in 1999.

Habibie was also known as world-class engineer educated in Indonesia, Germany, and the Netherlands. He spent nearly two decades working for German aircraft maker Messerschmitt-Boelkow-Blohm before returning to Indonesia back in 1974. His works were internationally renowned, particularly on his contributions and inventions to the world aircraft technology that earned him numerous awards in various countries.
(UN/RAH/ES)