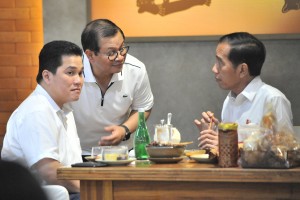 President Joko Jokowi Widodo and his challenger in the 2019 Presidential Election Prabowo Subianto will continue to maintain communication and visit each other, Cabinet Secretary Pramono Anung has said.

There will be more meetings between them with no special terms, Pramono said in Jakarta, Saturday (13/7).

For the record, President Jokowi and Prabowo met for the first time at MRT Station in Lebak Bulus, South Jakarta, after they contested in a bitterly presidential election. On that occasion, Prabowo also congratulated President Jokowi for winning the election.

Pramono added that the meeting was held for the common good and for the unity of Indonesia.

In the meantime, President Jokowi said that there are no more 01 or 02 (number referred to presidential election candidates) and no more kampret and cebong (terms used by both candidates supporters to insult each other), while Prabowo also shared the same sentiment.

“Hopefully the tension will cool down soon,” Prabowo said.