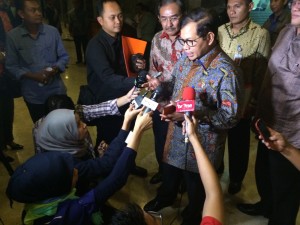 Cabinet Secretary Pramono Anung answered reporters questions after having a working meeting with Commission II of the House of Representatives (DPR), at the DPR RI, Jakarta, on Tuesday (24/11) evening

The additional tasks emphasize more on investment, permits, business and others, Pramono said to the reporters after having a working meeting on Asset Management with Commission II of the House of Representatives of the Republic of Indonesia (DPR RI) in Senayan, Jakarta, on Tuesday (25/11) evening.

Therefore, the Cabinet Secretary added, the ministers who become intercountries liaisons are only responsible to those matters when the investors encounter difficulties.So, they do not take the domain or authority of the Minister of Foreign Affairs, Pramono said.

According to Pramono, the reason behind the additional tasks is for the sake of efficiency. He mentioned that after the Minister of Energy and Mineral Resources Sudirman Said was appointed as the liaison for the Middle East, alhamdulillah, one month and a half after Presidential visit to the Middle East, covering Saudi Arabia, Dubai, Abu Dhabi and Qatar, many investors of the Middle East directly invest to Indonesia.

Because there is a minister who escort it. If some problems regarding the permit, land overlapping, a problem with, for example Pertamina arise, it will be brought to a limited cabinet meeting, Mas Pram, Pramono Anungs nickname, said.

Regarding the task of the ministers, Pramono reiterated that their main job is still the same. Therefore, the President instructed the ministers to visit the country where they are responsible for, only twice a month, in order to interact and make a list of major problems in the country.

That was a direct instruction from the President in the Plenary Cabinet Meeting, at the Bogor Presidential Palace, West Java, on Monday (23/11), Pramono added.

It is an effort to make the works of the cabinet effective, the Cabinet Secretary said.

Regarding legal basis for the ministers who are appointed as the liaison, Cabinet Secretary said that it is a Presidential Instruction. (EM/SM/JAY/RAH) (RAS/MMB/YM/Naster)