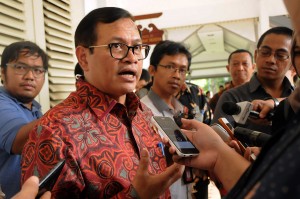 Cabinet Secretary Pramono Anung explained, in a Plenary Cabinet Meeting took place at Bogor Presidential Palace, West Java, on Monday (23/11), President Joko Jokowi Widodo still finds several problems related to the follow-up of agreement and investment between Indonesian Government and other countries. Meanwhile, the presence of investment, particularly Foreign Direct Investment is needed in order to boost the economy in our country.

Therefore, the President took breakthrough measures by appointing several ministers with extra tasks to guard and ensure the follow-up of several existed economic agreements and investments between Indonesia and friendly countries, the Cabinet Secretary said.

As previously reported, several ministers appointed by the President to carry on extra tasks are, among others:

1. Minister of Energy and Mineral Resources Sudirman Said, responsible for the Middle East;

4.  Minister of Maritime Affairs and Fisheries Susi Pudjiastuti for Russia;

5.  Minister of Trade Thomas Lembong for Europe and Australia;

8.  Coordinating Minister for the Economy Rizal Ramli for Malaysia;

10.Head of Investment Coordinating Board (BKPM) Franky Sibarani for Taiwan and Hongkong;

11.Minister of Communication and Informatics Rudiantara for the United States and South America; and

12.Minister of Agriculture Amran Sulaiman for Thailand, Vietnam and other Asian countries aside Singapore and Malaysia.

Cabinet Secretary Pramono Anung said the task of the appointed ministers is to be the focal point of the problem solving which arises during the implementation of investment cooperation.

However, Pramono added, in the implementation of those extra tasks, the ministers are still under Foreign Affairs Ministers coordination.

The Minister of Foreign Affairs is still responsible for economic diplomacy, foreign affairs and also responsible for establishing good relations between Indonesia and friendly countries, the Cabinet Secretary said.

Pramono also asserted that the Minister of Foreign Affairs still plays a key role in negotiation process to reach an agreement in economic cooperation and investment between Indonesia and other countries. (ES) (RAS/MMB/YM/Naster)