Cabinet Secretary: President Asks RKP 2016 Should be Appropriate with Nawacita as Has Been Campaigned 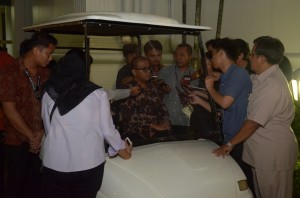 Cabinet Secretary Andi Widjajanto argues, in the discussion of the Government Work Plan (RKP) 2016, President Joko Widodo (Jokowi) provide direction for really show the program and really shows the changes appropriate with nawacita who has campaigned by the President.

“If the preparation of revised budget (APBN-P) in 2015, that’s still a transition. What government programs and what the President wants. 2016, this is the direction of the President for give an opportunity to the Government of Jokowi-JK for really show the pro-people,” said Andi told reporters after the Cabinet Plenary Session at the State Palace, Jakarta, Monday (13/4) night.

“Build up from the outskirts. Strategic issues that respectely be emphasized by the President. Nawacitanya really visible, and this is an opportunity of the government of Jokowi-JK for make the character changes in the state budget 2016,” Andi said.

As related to the amount of the state budget, according to the Cabinet Secretary, the Ministry of Finance, for example, the income of Rp 1,900 trillion, government spending Rp 2,000 trillion, regional transfer funds will significantly raise, has granted indicative ceiling.

“Perhaps for the first time, that health budget in accordance with the provisions of Act 5 percent from the state budget, that was revealed by the Minister of Finance but is still indicative ceiling, there will be finalization until May 2015,” Andi said.

Cabinet Secretary dismissed if the amount of the state budget in 2016 that equal to the Budget 2015. He said, 2015 is not up to Rp 2,000 trillion, but around Rp 1800 umpteen. “I do not remember how much the addition. Again, this still indicative only, still in the process of about two months,” he said.

On that occasion Cabinet Secretary Andi Widjajanto asserted that the Plenary Session of the Cabinet (SKP) which lasted until around 21:30 pm, just focus talking about RKP 2016. There is no talk about the performance of the ministers. “The President listened to the exposure of Bappenas, the Ministry of Finance and then the President and Vice President to discuss,” he said.

As for criticism related with the communication from Political Parties, Cabinet Secretary Andi Widjajanto explain, narrative communication between the president, the palace, and the ministers improved. So that, there is cross-ministerial communication, systematic, integrative in the planning to create a narrative that is targeted to the public, that discussed by the President. “But that is a general direction that is often submitted,” he said.

According to Andi, the President relied on several forums. Forum most commonly used are the Cabinet Meeting and Limited Meeting. (Humas Setkab/ES)