Cabinet Secretary: President Calls On Indonesia Not to Turn Our Back on the Seas 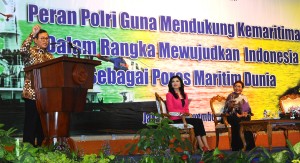 Cabinet Secretary Pramono Anung said that President Joko Jokowi Widodo said to the public that the country must return to where it was, the country must not turn its back on the sea anymore because our countrys future lies in the oceans.

The President will even tell and encourage people to build houses facing the sea to show that our ancestors were glorious because of the sea. Now is the time for us to be victorious by the sea, the Cabinet Secretary Pramono Anung said in his keynote speech at the 2015 One-day Conference of the 54th Generation School for Higher Rank Police Staff and Chiefs (Seminar Sehari Sekolah Staf dan Pimpinan Pertama Polri Angkatan 54 Tahun 2015), at the Mina Bahari III Building of the Minister of Maritime Affairs and Fisheries office, on Thursday (26/11).

According to Pramono, the Government has commited to bring a new color to the maritime sector.

He mentioned that the nation changes the paradigm of the country by not providing subsidy, thus teaches us to become independent as a nation of warriors in the global.

We could not be strong to fight against the world that keeps changing if we are not motivated, Pramono said.

In the conference adopting the theme Police Role to Support Maritime in Order to Materialize Indonesia as the World Maritime Fulcrum (Peran Polri Guna Mendukung Kemaritiman Dalam Rangka Mewujudkan Indonesia Sebagai Poros Maritim Dunia), Pramono Anung said in the matter of the sea, sectoral ego must be fought together. He askes certain agencies to strengthen itself by establishing an academy.

We believe that the Indonesian National Police (Polri) and the Indonesian Navy (TNI AL) are capable of guarding Indonesian sea territory so that there is no additional cost that will become a burden in the State Budget, the Cabinet Secretary said and applaused by the participants of the 2015 Sespima Polri Conference.

The Cabinet Secretary explained that Indonesia is now has livestock transport vessels to expedite transportation from East Nusa Tenggara to Jakarta in order to maintain the good quality of the beef.

Meanwhile, regarding illegal fishing, President Jokowi appointed Minister of Maritime Affairs and Fisheries Susi Pudjiastuti as the Chief of Illegal Fishing Task Force. That makes the Minister be able to order the act to drown the ships.

The Minister of Maritime Affairs and Fisheries Susi Pudjiastuti said that her office and the Indonesian National Police (Polri) still have a lot of works in order to solve the case of illegal fishing as soon as possible.

Our police fellow, Indonesia is a great country. The duty to preserve our marine and fisheries have become Presidents mission for the sake of nations future. We only have seas that have unlimited resources and must be protected if we run of resources from mining and forestry. The sea must be protected by a sustainable program so that the sea could make economic growth increase by 10 percent, as well as to provide us money when we grow old, Minister Susi said.

By the end of the event, the Cabinet Secretary delivered a specific message to the participants.

Our fellow citizens, the change in paradigm is simply started from the high-ranking officials, by giving a direct example. The future of Polri lies in your hands. If you do not change, you will be annihilated by the time, particularly when the high- ranking officials has changed. Once again, our future is in your hands, do not let your ego overcomes yourselves, Pramono Anung firmly said.