Cabinet Secretary: President Jokowi Wants Out of the Box Inputs from KEIN 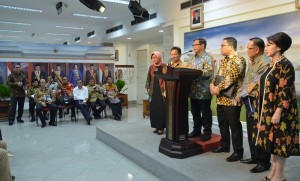 Minister of the Environment and Forestry answering questions from reporters at the Merdeka Palace, Jakarta, Tuesday (2/2)

President Joko Jokowi Widodo on Wednesday (10/2) at the Presidential Office, Jakarta, led a limited cabinet meeting on the coordination between the National Economic and Industry Committee (KEIN) and the Government, which in this case is represented by the President, Vice President, and the ministers.

Shortly after the limited meeting, Cabinet Secretary Pramono Anung in a press conference told reporters that KEIN is assigned to conduct studies about economic and industries issues, be it at the national and international levels.

KEINs second task, Cabinet Secretary said, is to give suggestions to the President about strategic issues that determine economic policies as well as issues concerning national industries.

The mechanism is like from the cabinet to the President. Certainly, Cabinet Secretariat will deliver memorandums about the suggestions to the President, Pramono added.

The third task, Pramono said, is to give inputs to the President outside tasks carried out by ministries and institutions.

Because the President wants to receive out of the box inputs from KEIN, Pramono said.

The Cabinet Secretary further said that KEIN is also expected to give second opinions on what have been done by ministries and institutions.

The President also wants to get inputs from KEIN about the road map of the Governments programs, Pramono concluded.