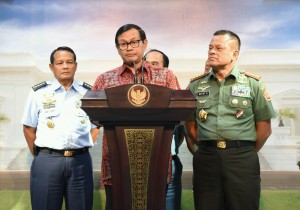 President Joko Jokowi Widodo asserted that budget of the Indonesian National Defence Forces (TNI) is expected to increase more than 1 percent in the future. Once the budget increases as expected, or exceeding 6 percent, the allocation for 2019 TNIs budget will be around Rp 200-250 trillion.

Beside national defence and security power, including transparent and measurable alutsista, we understand that in the future, food and energy sectors will become our strength as well, Pramono said to the reporters after a limited meeting on the strengthening of TNI, at the Presidential Office, Jakarta, on Tuesday (23/2) afternoon.

Pramono Anung added that President Jokowi will decide to complete TNI restructuring because the process has already finished and has been proposed to the President by Commander of TNI as well as related ministries.

We hope the decision will be announced soon and it is expected to be able to strengthen the TNI, Mas Pram, the nickname of Pramono Anung, said.

According to Pramono, President Jokowi also asked TNI not to focus the development only in Java. It should be Indonesia-centrist, starting from the border areas until the power of TNI spreads thoroughly. (DID/ES) (RAS/MMB/YM/Naster)