Cabinet Secretary: Price Reduction on Fuel and Electricity to Announce Next Week 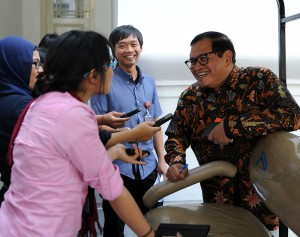 Cabinet Secretary responded to reporters questions, at the Presidential Office, Jakarta, on Thursday (1/10)

He mentioned the calculation on fuel is part of Policy Package which will be announced next week.

As previously reported, President Joko Widodo asked Pertamina to recalculate the price of BBM  which has been announced by the Energy and Mineral Resources Ministry’s Oil and Gas Director General, I Gusti Nyoman Wiratmaja Puja, on Wednesday (30/9). The price shall not change until January 2016.

Let us recalculating it. Please calculate again if is possible to lower the price of premium even if it is just a little, the President said when giving remarks in a limited meeting on permit cutting time on Thursday (1/10) afternoon, at the Presidential Office, Jakarta.

President Joko Widodo admitted that he knew that the price of BBM fuel oil which apply now is still (-2%) minus two percent from the economic price and it has been reported as well. However it probably could be set lower, the President said.

In a press statement at the office of Energy and Mineral Resources Ministry on Wednesday (30/9), I Nyoman said that there is no change in the price of BBM fuel oil due to the selling price is still below the economic price that makes PT Pertamina at loss.

We decided to keep the BBM fuel oil at the same price in order to maintain the stability and to make economic plan easier, Wiratmaja said while mentioning that in the future the price of BBM fuel oil will be reviewed once in every three months or on 1 January 2016.

Until now, the price of premium fuel is Rp 7,300 and diesel fuel is Rp 6,900. Meanwhile, by considering the world average price of oil and current exchange rate of Rupiah to USD, as well as Mean of Platts Singapore (MOPS) in the last six months, the average price of premium fuel, per October 2015, should be Rp 8,300/litre and diesel fuel Rp 6,750/litre. (SLN/DID/UN/ES) (RAS/MMB/YM-Naster/Sy)