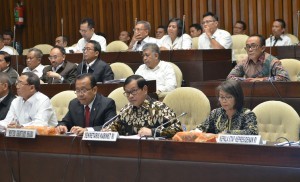 On Monday (12/6) afternoon, Cabinet Secretary Pramono Anung attended a Working Meeting with Commission II of the House of Representatives at Nusantara Building, Senayan, Jakarta. Starting his presentation, the Cabinet Secretary explained that based on the result of the audit of the Supreme Audit Agency (BPK) over the 2016 Financial Report, the Cabinet Secretariat received Unqualified Opinion (WTP). Budget realization reached Rp182,398,615,866,00 or 86.75 percent from the total budget, he said.

This achievement is the result of two working programs, i.e. Management Support and Implementation of Other Technical Tasks of Cabinet Secretariat totaling 90.67 percent; and Cabinet Management Support for President and Vice President in Government Administration totaling 67.34 percent.<>

Based on the evaluation of the 2016 State Budget, the absorption was as much as much as 86.75 percent because of two things, first, Presidential Instruction Number 4 of 2016 dated 12 May 2016; and second, Presidential Instruction Number 8 of 2016 dated 26 August 2016. So, it needed three months  for adjustment, Pramono Anung said. Regarding evaluation of the expenditures of the 2017 State Budget, until 5 June 2917, the absorption was 31.32 percent consists of employee expenditure, goods expenditure, and capital expenditure.

The 2018 indicative ceiling received by Cabinet Secretariat decrease by RP4,509,001,000,00 or 2.05 percent from budget allocation of the 2017 State Budget, the Cabinet Secretary added and said that more detailed matter will be discussed later.

We shall wait if there are inputs from UKP PIP to be included in the Revised State Budget (APBN-P), Pramono Anung said and hoped that the Commission II, as a working partner, shall give its support.