Cabinet Secretary: There Still Will Be the Fourth Policy Package 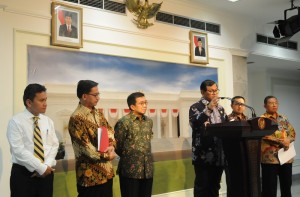 “Earlier President entrusts to us that there will be a fourth package policy. It later was assigned to the Coordinating Minister for Economy, Darmin Nasution, and all of us to say whether next week. But certainly there will be the fourth policy package,”  Cabinet Secretary Pramono said when delivering the government’s announcement on  the Third Policy Package submitted by a number of ministers, chairman of the Financial Services Authority (FSA), and Deputy Governor of Bank Indonesia, at the office of the President, Jakarta, Wednesday (7/10) evening.

Related to the Third Package Policy, that focuses on the decline in energy prices and improving the business climate, Cabinet Secretary Pramono Anung believes that Policy Package will have an icfmpact as the Second Package of Economic Policy, that was announced on September 29 last.

“The momentum we feel on this day in which the rupiah has strengthened significantly in the past week. We heard the exchange rate of the past has been under $ 14 thousand, if I am not mistaken Rp 13,900, and this momentum must be maintained well by the government, FSA, BI,” Pramono said as he mentions, that’s the reason why the announcement of the Third Policy Package was conducted jointly by the governments that responsible for fiscal, BI monetary and also FSA. (EN/RAH/ES) (Sy)