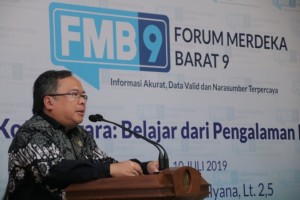 Bappenas Head Bambang Brodjonegoro talks in a public discussion in Jakarta, Wednesday (10/7). (Photo by: Minister of Communication and Information PR)

According to Bambang, Indonesia can learn from other countries with similar socio-economic condition, citing Brazil as one of the examples.

Brazilian capital Brasilia was founded in 1960. The Brazilian Government decided to move the capital from Rio de Janeiro to a more central location.

Bambang went on to say that Indonesia can learn from Brazil in building a modern capital city, adding that capital relocation can also stimulate a countrys national pride.

Brazil, Malaysia, South Korea, Kazakhstan, and Australia are amongst those which successfully relocated their capitals. Meanwhile, Egypt, Iran and Liberia are in the stages of building their new capitals, Bambang said on Wednesday (7/7).

History shows that capital relocation happens once every 3 to 4 years and the trend has now shifted to once every two years, he said.

Nevertheless,  the capital relocation, he added, should also take into account several aspects such as political risk related to the need to speed up completion of development within 5 (five) years, realistic calculations of costs including land values, and infrastructure development.

Infrastructure brings a positive impact on equitable development, he said.

For the record, President Joko Jokowi Widodo in April this year decided to push ahead with his plan to move the capital from Jakarta and build a new center of government outside Java, citing the need to ensure more equitable development and address overpopulation in Java. (Minister of Communication and Information Public Relations Bureau/ES)