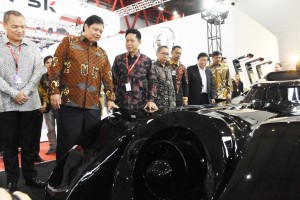 Minister of Industry Airlangga Hartarto attends the opening of the 2019 Indonesia International Motor Show (IIMS) in Jakarta, Thursday (25/4). Photo by: PR of Ministry of Industry.

This increase is in line with the growing demand of foreign consumers, especially in ASEAN countries and in new market such as Australia.

“The ASEAN market has a very good potential. Now, Indonesia’s largest car export destinations are the Philippines and Vietnam while Thailand is also starting to open its market,” Minister of Industry Airlangga Hartarto said during the opening of the 2019 Indonesia International Motor Show (IIMS) in Jakarta, Thursday (25/4).

The Minister added that the opportunity to increase Indonesias car lies in the Australian market, as a result of comprehensive economic cooperation agreement between the two countries.

“The Government is waiting the ratification (of the agreement) by the parliament of the two countries. If the agreement is ratified, the potential for the exports is open, including the (export) of electric vehicles,” he explained.

Airlangga went on to say that the automotive industry is one of the manufacturing sectors that already has deep structures in Indonesia, starting from upstream to downstream. “For example, we already have raw materials such as steel, plastic, glass and tires, so that we can produce car engine domestically. The average of local content is above 80%. This is the mainstay of our exports,” Airlangga said.

In addition, the potential for the automotive industry in Indonesia is quite large, with the number of car production reaching 1.34 million units with the value of US$13.76 billion in 2018. Currently, four major automotive companies have made Indonesia a player in a global supply chain.

“In the near future, there will be several automotive principals who will join and will make Indonesia an automotive manufacturing hub in the Asian region,” Airlangga said, adding that it will boost the performance of the automotive industry to make a significant contribution to the national economy. “Moreover, this industry absorbs a large workforce, more than one million people,” Airlangga said.

“In the roadmap, by 2030, Indonesia is expected to become the base for production of Internal Combustion Engine (ICE) and Electrified Vehicles for domestic and export markets,” Airlangga said, adding that the automotive industry needs to be supported by domestic industries, from production of raw materials to major components in order to optimize productivity along the value chain.

In the roadmap for developing the national vehicle industry, the Government targets as much as 20% of the total production of new vehicles in Indonesia to use electric power by 2025 in order to support the commitment of the Government to reduce greenhouse gas (CO2) emissions by 29% in 2030, while maintaining national energy independence.

Airlangga went on to say that the Government has prepared strategic programs for the development of Low Carbon Emission Vehicles (LCEV), including Energy-Efficient Vehicles at Affordable Prices (LCGC), Electrified Vehicles and Flexy Engines.

He added that the strategy in supporting the development of LCEV includes fiscal incentives in the form of tax holidays or mini tax holidays for the main component industries, such as the battery industry and the electric motor industry (magnets and motor coils). This incentive aims to boost investment in Indonesia.

“We have also proposed super deductible tax incentives up to 300% for industries that carry out research and development and design activities, and 200% for industries involved in vocational activities,” Airlangga said, adding that the policy aims to make the industry more competitive in the future global market.

“The Ministry of Industry also proposes special policy on import duty and other taxation, including regional taxes to accelerate the development of electric vehicle industry in Indonesia,” he added.

Another strategic step is extending new export markets through negotiations on Preferential Tariff Agreement (PTA) cooperation and Comprehensive Economic Partnership Agreement (CEPA) with countries that have high demand for vehicles. “The Government has involved in negotiations of the PTA or CEPA to open new export markets for Indonesian automotive industry,” Airlangga said.

The LCEV development policy is also supported by national banks. For example, PT. Bank BRI becomes the first national bank to launch the Motor Vehicle Loan program for financing electrified vehicles. With an interest rate of 3.8% per year with a tenor of up to six years, it is expected that the people can switch their car to low-emission vehicles and support national energy security.

On this occasion, Minister of Industry, on behalf of the Government, delivered his appreciation to PT. Dyandra Promosindo for organizing the Telkomsel Indonesia International Motor Show (IIMS) under the theme of “Your Infinite Automotive Experience”.

“This event is not only an international-scale automotive exhibition, but also a medium for the ecosystem of the automotive industry in Indonesia to educate visitors, boost business activities with stakeholders, and provide leisure activities for families, the Minister said.

For the record, IIMS 2019 is held from 25 April to 5 May 2019, involving 36 automotive companies. The event focuses on digital technology and collaboration with various industries. The 2019 IIMS organizers are optimistic that they can bring in more than 500,000 visitors with a transaction value of more than RP4 trillion.