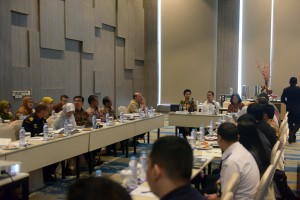 The President expected infrastructure development can bring significant improvement in the next five years, meaning that synergy between central government, provincial governments, and regional governments can increase economic growth, reduce poverty, and unemployment rates, as well as Gini ratio, Deputy Cabinet Secretary for the Economy Satya Bhakti Parikesit said when leading a meeting which adopted the theme Discussion on the Increase of Economic Growth in East Java through Production Sector, at Grand Mercure Hotel, Jakarta, Monday (1/7).

According to Satya, President Joko Jokowi Widodo has expressed hope that East Java and Central Java can be model cities for development conducted through synergy and great cooperation between central and regional governments.

Therefore, they will set good example for other regions or provinces, Satya said, adding that this meeting is aimed at incorporating plans that were formulated by the central government with those of regional governments and ministries/institutions.

The Deputy Cabinet Secretary also expressed hope that mutual understanding and objectives of central government, regional governments, and ministries/institutions can be reached from this meeting so that development programs for the next five years can be well-implemented.