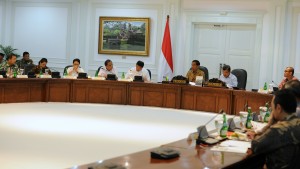 President Joko Widodo (Jokowi) together with Vice President Jusuf Kalla, in the Presidential Office Jakarta on Tuesday morning (30/12), chaired the cabinet meeting for the first time. This meeting was related to the Defense Industry Policy Committee (KKIP).

In his introductory remarks, President Jokowi stated the four main priorities in the defense policies.

The first priority is to guarantee the fulfillment of defense needs, including those related to the improvement of soldiers welfare and the provision of the primary weaponry defense system (alutsista).

The third priority, President Jokowi asserted, is that defense is not only a matter of fulfilling the Minimum Essential Force (MEF) but it must also be aimed at building Indonesian National Militarys (TNIs) power into a respected one.

The fourth priority is to place the state defense policies as integral parts of our comprehensive security approach.

President Jokowi explained that self-reliance in defense industry can be attained through several approaches implemented simultaneously.

The first approach, President Jokowi mentioned, is through transfer of technology. It requires that every purchase of weapons must be accompanied by transfer of technology, especially to strategic industries, like PT PAL, PT Pindad, and PT Dirgantara Indonesia (DI) (all those three are state-owned defense-equipment manufacturers).

The third approach is related to the system integrity. According to President Jokowi, the provision of the primary weaponry defense system (alutsista) must be closely interconnected between all the military forces. President Jokowi gave an example by pointing out that the Armys tanks cannot operate in an integrated operation with the Air Forces jetfighters or the Navys warships if the system isnt well integrated. Thats what we must prevent from ever taking place, he asserted.

The self-reliance in defense industry, President Jokowi continued, must also be interconnected with the improvement of the state-owned enterprises management.

President Jokowi instructed that strategic state-owned defense industries must carry out total improvement, including improvement in their competitiveness, productivity, and production capacity (especially that of PT PAL, PT Pindad, and PT DI), so that we are capable of building partnership with other global-scale defense industries like those in South Korea, Western Europe, and North America.

For that reason, our strategic plans for the development of defense industry must be for long term. Such plans should not cover only one or two years but should cover long term, President Jokowi stated.

In order to make defense industry more efficient, according to President Jokowi, we must create civil-military double technology. It means that defense industry should cater not only for defense needs but also for non-defense needs. For example, components for Anoa Panzer produced by PT Pindad can also be used as the components for commercial trucks.

President Jokowi also mentioned that PT PAL should also produce ships which can also be used as commercial ships or fishing ships. Furthermore, the CN 295 planes produced by PT Dirgantara Indonesia (DI) should also be capable of serving as civil defense planes.

The most important is that we must be able to reform our maritime industry ourselves, including our shipyard industry, President Jokowi said and added that if we dont carry out the reform, foreign players will dominate and invade, while we only become observers.