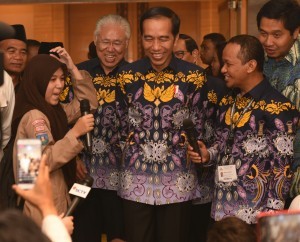 Changing Indonesian national economic landscape will open up a lot of opportunities for budding entrepreneurs, according to President Joko Jokowi Widodo.

The President made the statement in his remarks at the Indonesian Young Entrepreneurs Association (HIPMI) National Leadership Meeting in Tangerang, Banten Province, on Wednesday (7/3).

Ive followed the current business trend. I dont know if the owner of Upnormal restaurant attending this event, but the restaurant has 64 branches in several locations. That is an example of prospective economic industry that is currently growing, the President added.

President Jokowi added that running a hangout place where people can have various foods and beverages will become a popular business and in several countries, running restaurants and eateries will be a fastest-growing business.

The second thing that has developed significantly is startup business in application system, like Ruangguru.com for example, the President said.

The young generation is expected to run e-commerce business and others that generate huges profit and help the communities through socio-entrepreneur, the President stated.

Another business that deserves attention according to the President is handmade crafts business, which has huge opportunities both in domestic market or as export commodities.

Yesterday, I watched the process of making a handmade jacket. It was painted manually by using hand and I think it will attract large market if we can market it effectively, the President firmly said.

Also on that occasion, President Jokowi witnessed the modification process of motorcycles and said that entrepreneurs should watch that processes and if it can be developed and generates large production volumes, it will boost Indonesias economy.

Regarding infrastructure projects being developed in several regions, including toll road in North Sumatra, Trans Papua (in Papua and West Papua) that have not yet involved local entrepreneurs, President Jokowi invited Chairmen of HPMI West Papua and North Sumatra branches to meet him.

I only invite those two chairmen because the other leaders did not ask me. We will talk later at the Palace. This kind of opportunity can also be taken by entrepreneurs at regional level, the President concluded.