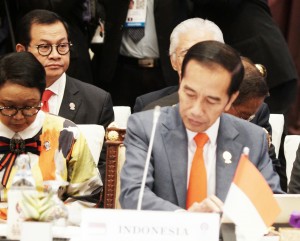 Trade war between China and the United States may affect several sectors including the security, stability, and prosperity of the region, according to President Joko Jokowi Widodo.

Therefore, President Jokowi called for the strengthening of economic foundation of ASEAN countries be it in individual or collective manners.

The statement was made by President Jokowi during the Plenary Session of the 34th ASEAN Summit as quoted by Minister of Foreign Affairs Retno Marsudi in a press conference at the Athenee Hotel, Bangkok, Saturday (22/6).

Minister Retno added that President Jokowi, on that occasion, also said that cooperation with ASEAN partner is really important. Therefore, the President reminded all ASEAN member countries about the importance of their commitments to accelerate conclusion to Regional Comprehensive Economic Partnership (RCEP) negotiations this year.

Adopting ASEAN Outlook on the Indo-Pacific is a key amid the current global condition, he added.

The outlook reflects ASEAN’s centrality and strength in respecting peace, a culture of dialogue. It is also aimed at strengthening cooperation, the Minister said quoting the Presidents statement.

According to the Minister, the Government of Indonesia expressed its gratitude for the support of ASEAN member countries that have been joining hands in developing the ASEAN Indo Pacific Outlook concept since a year ago when Indonesia began to initiate this ASEAN Pacific concept. (DND/DID/ES)