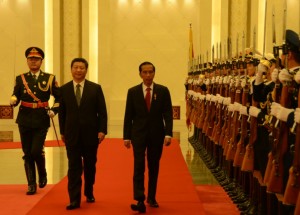 President Jokowi, accompanied by the Chinese President Xi Jinping inspect a guard at a state ceremony, at the Great Hall of the People, Beijing, Thursday (26/3).

President of the Republic of China Xi Jinping gives honor at a state ceremony, while welcoming the visit of President Joko Widodo (Jokowi) and First Lady Iriana, at the Great Hall of the People, which is located next to Tiananmen Square, Beijing, Thursday (26/3) afternoon.

Chinese President Xi Jinping said in his speech that very happy to meet with President Jokowi in Beijing and attend the Boao Asia Forum.

“The visit of His Majesty this time coincides with the 65 years of diplomatic relations between China and Indonesia, and has a sense of history, which is very important,” Jinping said.

Chinese President was invited President Jokowi, to continue encourage the comprehensive strategic partnership between the two countries, in order continue to grow in a more healthy and smooth. 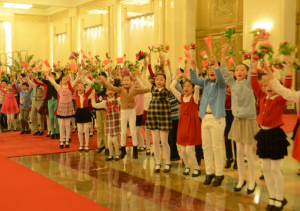 Tens of children holding flags of Indonesia and China jumped around to welcome President Jokowi, at the Great Hall of the People, Beijing, Thursday (26/3)

Presented by Xi Jinping, China and Indonesia are the first and the fourth largest population in the world, and the largest developing country in the world. Both countries, further Jinping, could complement each other economically and have a mutually beneficial cooperation with huge potential.

On that occasion, the Chinese President Xi Jinping praised the progress that achieved President Jokowi after coming to Beijing in November last year, while attending the APEC summit.

“I am delighted that with our joint efforts over the past 4 months, our cooperation in all fields has been made much progress. I feel satisfied with the very positive progress achieved by both our countries. I also believe that the visit of His Majesty this time will further encourage cooperation between Indonesia and China can continue to grow in all areas,” Jinping said.

While President Jokowi said, that Indonesia is committed to strengthen the friendship and cooperation with China, both at the bilateral, regional and international level.

“China is a close friend of Indonesia. Geographically, Indonesia and China adjacent the located. Indonesia has a wealth of natural and China has the knowledge, experience in the field of infrastructure, so the comprehensive strategic partnership can complement each other “, Jokowi said.