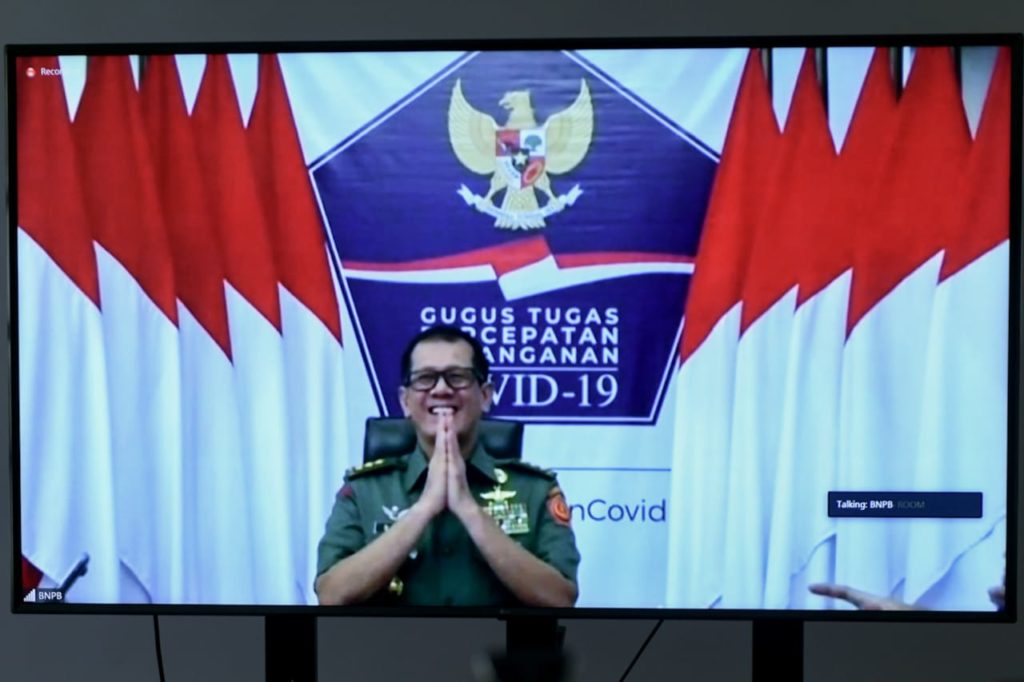 Head of the National Disaster Mitigation Agency (BNPB), Doni Monardo, as Head of the Coronavirus (COVID-19) National Task Force asked all to anticipate the second wave of COVID-19 pandemic by raising collective awareness to always vigilant and maintain discipline until a vaccine for the virus is found.

“The President always states that (the restrictions) must always be enforced though the number of new COVID-19 cases has shown a decline in some regions. Discipline and collective awareness must also be maintained,” Doni said responding to reporters’ questions after a Limited Meeting Monday (11/5).

The pandemic, he added, cannot be handled by the Central Government alone but it requires good cooperation between the Government, academicians, business sector, volunteers, mass organizations, non-governmental organizations, and media as promoted by the Task Force through a pentahelix (involving various parties) model. Media plays a strategic role since 63 percent of information is disseminated through television and radio.

“Once again, we encourage media to always support the Government programs. In this war against the pandemic, we must unite, from the Central Government to the smallest government units namely the neighborhood units (RT/RW),” he said.

According to Head of the Agency, prominent figures in the community must be involved to disseminate government policy to the public in order to raise public obedience.

“Hospital owned by the Polri in several regions have strived to improve their performance by adding medical staff and improve their quality, as well as encourage them to work in shift for 24 hours,” he said adding that by working in shift, the laboratory can open 24 hours a day and test more specimens.

In addition, the Task Force provides incentives for laboratory staff to motivate them since there are 280,000 specimens that must be tested immediately.

The Task Force also cooperates with the Indonesian Doctors Association (IDI) to provide some back up for regional task force and laboratories.  Doni further explained laboratories that can examine COVID-19 samples are owned by different agencies, such as BPOM (Indonesian Food and Drug Monitoring Agency), Ministry of Agriculture, universities, State-Owned Enterprises, and Balitbangkes (Health Research and Development Agency). However, these laboratories are not integrated and they report only to their parent agency.

Regarding recovery, President Joko “Jokowi” Widodo has instructed the Task Force to involve experts on the economy and sociology to create effective measures for the recovery.

“It aims to protect the nation and citizens from getting affected by the virus. Those affected by the virus comprise people who lost jobs and purchasing power that will eventually lower their quality of foods. Thus, they might be infected,” he said adding that cooperation must be promoted to prevent people from being infected by COVID-19 and to prevent them from a layoff.

He further explained that mudik (exodus before Eid) ban will not be lifted and called on regional heads to be careful of hoaxes. If there are some rumors, they can confirm it to heads of the Task Force at provincial, regency/city levels, and to the Polri and TNI.

“We also received information that some travel agencies still offer services for mudik. They have broken the regulation of Large-scale Social Restrictions (locally known as PSBB) and violated Article 92 of Law Number 6 of 2018 that may be subject to criminal offence and fines. They may also put the lives of their families in hometown at risk,” he stated.

Therefore, Doni reminded to public not to participate in mudik if they care for the families in hometown. With discipline, we can break transmission chain of the virus and can have a normal life by still strictly following the COVID-19 health protocols.

Regarding citizen repatriation, he said that the Task Force provides isolation facilities for ship crew, Indonesian Migrant Workers, and students who just returned to the country. Those passing health examination and tested negative for COVID-19 through PCR test are allowed to return to their hometown, while those with vague results will stay at isolation facilities, and those showing symptoms will be referred to Wisma Atlet (Athlete Village) Emergency Hospital.

In the meantime, expert staff of the Task Force, Wiku Adisasmito, said that the total case of COVID-19 infection at the beginning of April reached 1,900 cases. The number of new cases then slightly declined but the following week it raised to 2,237 cases.

“We can only say the curve has flattened if the trend of people positive for COVID-19 continues to decline in weeks. The trend must be observed weekly not daily,” he said adding that the curve in Indonesia has not flattened but the number of new cases has declined.

In Jakarta alone, the total case of COVID-19 which at its peak in April has declined for a short period before increasing in the weeks after. The increase could have been caused by the increase in the number of test. Thus, the trend must be observed weekly not daily.

“Data is really important to determine the trend. The government will also use national and regional data as a reference to reopen the economy,” he concluded. (MAY/EN)