The Presidential Palace has its own way to celebrate the 88 years of Youth Pledge. On Friday (28/10) evening, the Merdeka Palaces front yard was transformed into a stage for an arts and cultural performance Nusantara Berdendang.

The event was also enlivened by arts and cultural performances from various regions in Indonesia, such as Betawi Topeng Dance from Jakarta, Gandrung and Kuntulan Dance from Banyuwangi, Wayang Ajen from West Java, Tua Reto Lou Dance and sasando music from East Nusa Tenggara.

The stages was also enlivened by the performances of Piring Dance from West Sumatera, Hudoq Dance from East Kalimantan, Topeng Ireng Dance from Boyolali, and Mambri Dance from Papua. The event Nusantara Berdendang was concluded by a medley of traditional songs where the performers collaborated in one choreography. 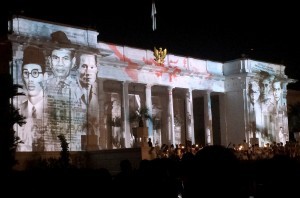 Besides traditional arts and cultural performances, Nusantara Berdendang also presented a video mapping show. The building of the Merdeka Palace was transformed into a giant screen that aired the visualisation of the history of Youth Pledge as well as the struggle of the youths in 1928.

More than that, the video mapping also became the background for all dance performances that showed visualisation matching with the dances, for example Rumah Gadang, batik motive, etc.