Commemoration of the 60th Asia-Africa Conference Held on April 19 to 24, With Two Big Events 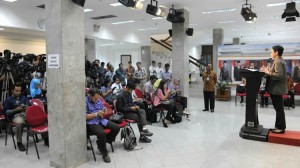 Foreign Minister (FM), Retno Marsudi in her statement to reporters at the Presidential office, Jakarta, Friday (9/1) said that, for the Asian-African Summit to be held on 19 to 23 April 2015 in Jakarta, while the commemorative events will be held in Bandung, on 24 April 2015.

“The agenda for the meeting in Jakarta consists of several meetings, namely high-Senior Officials Meeting, then the Ministerial Meeting, and will end with The Asia Africa Summits Leaders Meeting”,  Retno said.

FM said, preparation for the Commemoration of the 60th Asia Africa Conference be done immediately, and President Jokowi provide direction, in addition to the main event as mentioned above should also carried out at least two big side events, namely Asia Africa (AA) Business Summit, and AA Carnival which will be managed by the Mayor of Bandung and the Province Government of West Java.

Regarding the number of invitations, according to the FM, the invitation was delivered to the 109 heads of state, and 25 international organizations. The main theme will be highlighted by Indonesia in this event is the strengthening South-South Cooperation.

“But at the same time we also want the South-South Cooperation is to contribute to the efforts for peace and prosperity of the world,” said Foreign Minister Retno Marsudi. (PR Setkab/ES) (Humas Setkab/ES)