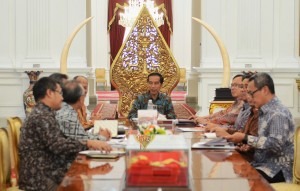 The Chairman of Commissioners Board of the Deposit Insurance Agency (LPS) Heru Budiarho assesses, the condition of the national banking currently in the good condition and able to contribute to the strength of the national economy.

“Our assessment of the economy that we can express, so far the situation is very good,” said Heru told to reporters after received by President of Joko Widodo (Jokowi), at the State Palace, Jakarta, together with other LPS commissioners and Acting Chief Executive of LPS Fauzi Icshan, and Ronald Waas as an Ex Officio member of Bank Indonesia, Thursday (23/7).

Heru said, the conclusion that the good condition of the national banking, one of which is based on the ratio of funds from the banking premiums collected over the last 10 years compared with customer funds that covered.

He said, if the LPS funds collected from premiums accumulated in the last 10 years amounted to Rp 50 trillion, which is used to maintain stability, paying customers’ funds are closed. The total amount is only Rp 4.5 trillion. “So it means that the Indonesian economy is good, in the last 10 years the durability of the banking is also good,” Heru said.

the Chairman of Commissioners Board of LPS also admitted, there is external pressure from Greece, China, and others. Nevertheless, he said so far the impact is minimal and there has been no impact quite relevant.

“We also see that the durability of banking and our economic fundamentals are relatively good. If banking CAR is still at the level of 20.5 percent that is very good. NPL (Non Performing Loan) in the range of 2.45 percent. Net NPL is only 1.42 percent. Therefore, the reserve is also quite, it is also very good, “said Heru as he mentioned, the banks that closed were small-scale banks so that do not have a significant impact.

Regarding his presence at the Presidential Palace, the Chairman of the Board of Commissioners of LPS Heru Budiargo argued, for updates on the deposit insurance agency and to report on the developments that occurred and the challenges that exist in the future.

Heru explained, President Jokowi hoped that the Draft Law (Bill) on the Financial System Safety Net (JPSK), which the government is currently discussing with the Parliament could be completed before the end of this year.

The Bill of JPSK, he added, would serve as an antidote to the economic crisis if hit Indonesia. “So that things are indeed important, so that Indonesia is ready in crisis prevention and resolution supported by valid legal umbrella,” he said.