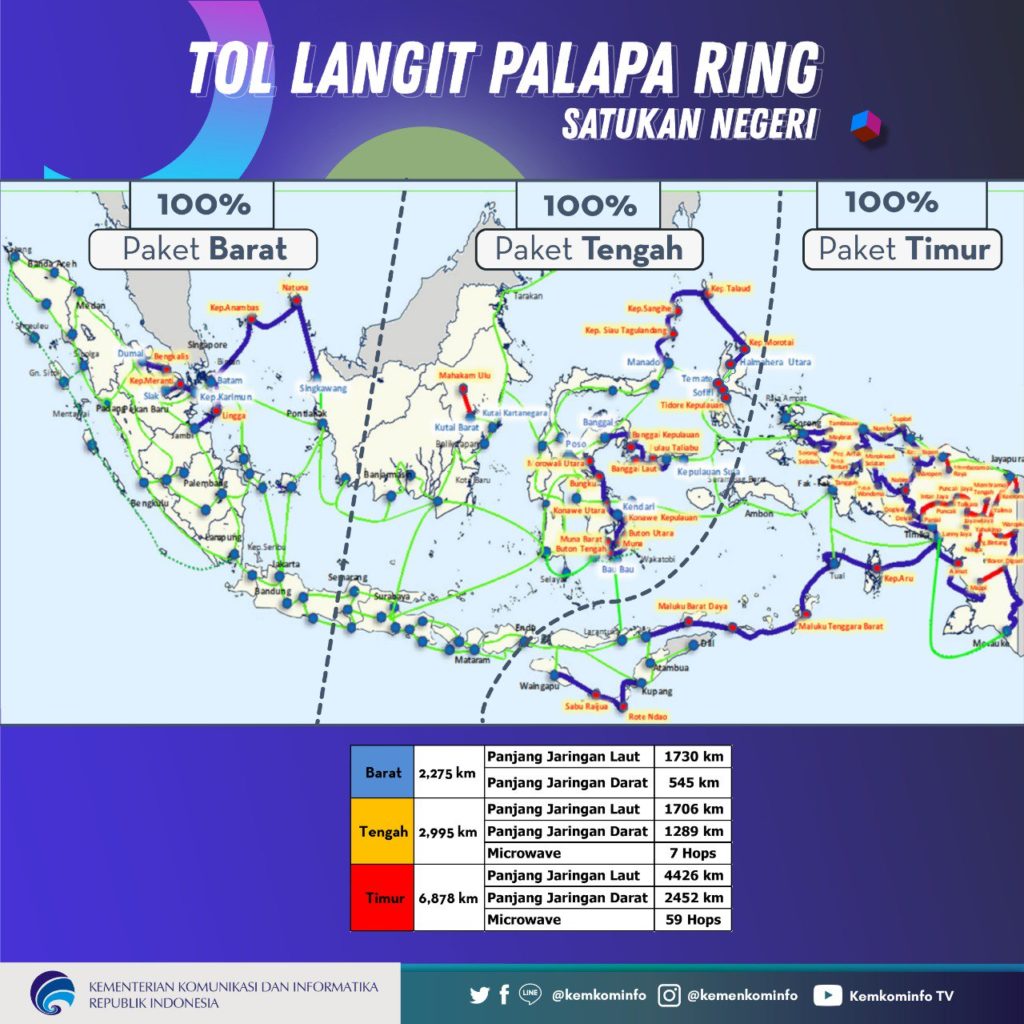 The Government has completed the construction of the Palapa Ring also known as Tol Langit (Sky Toll) – a high speed nationwide broadband network that connects Indonesia from the city of Merauke in the East to Sabang island in the West.

“The Palapa Ring did not resolve the issue of signal availability to the public; yet we already have prepared the sky toll. Therefore, we invite operators to solve this connectivity issue. It is not possible for each to go their own way,” said Anang in Media Merdeka Barat Forum Discussion (FMB) 9 in Jakarta, Tuesday (15/10).

The completion of the Palapa Ring, Anang said, reaffirmed that the Government’s supports for the role of operators in creating communication access, adding that there has indeed been a problem so far, not only because of the small population but also an extraordinary cost problem because infrastructure development had to be carried out across the ocean.

“It costs up to three to four times over the development of land project,” said Anang, adding that with the completion of the Palapa Ring broadband network, operators are expected to immediately make the most of it and sell their services at affordable prices and provide Internet service with the same speed as that in Java.

Thus, people residing in the frontier, outermost and least developed (3T) regions and border areas can enjoy high speed internet access just like those in Java island or capital Jakarta, which is up to around 7 mbps, he added.

“Back then when the Palapa Ring network was yet available, it took a long time for messages to be sent,” Anang said, adding that a total of ten operators have now been in operation in the western and central Palapa Ring.

Meanwhile, in the eastern Palapa Ring, he continued, operators are given three months for free trials using the Palapa Ring network.

“We aim for areas that are categorized as not feasible for business that are home to 10 percent of the population of Indonesia. The problem is that the 10 percent is hard to reach since they are located in isolated areas. For this reason, the Government will step in if the operators are not able to resolve it,” said Anang.

The solution to the problem is by building telecommunications infrastructure in the form of 4,000 base transceiver systems (BTS) and multifunctional satellites, Anang added.

“The provision of 4,000 BTS is expected to bring direct impacts on society so the 4G signal can be available for real,” said Anang.

Anang went on to say that BTS was already available; however, the transmission remains a problem, given that the distance to the satellite is 36 thousand kilometers from the surface of the earth so the signal travels back and forth is 72 thousand kilometers.  With this Palapa Ring, Anas continued, it will cut signal travel time. (Ministry of Communications and Information PR/ES)