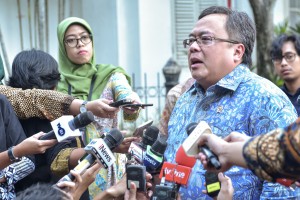 The cause, he added, are among others complex regulations and institutional factors.

“The Government has examined causes of the slowing of economic growth and found out that complex regulations and institutional factors are the major causes,” Bambang told reporters on Monday (8/7).

According to him, institution here means the Governments bureaucracy that is still considered unreliable to facilitate investment and trade.

As for regulations, the existing regulations, he added, are still too complicated that it takes days to finish the whole process. For example, administration and customs process for exports take an average of 4 days and a half to finish, or longer than those in the neighboring countries which take around 2 days, or even half day in Singapore, he added.

Regarding investment, Bambang said that investment permit in Indonesia takes around nineteen days and has a higher cost compared to those in the neighboring countries.

“The proposed solution was that the Government will have to focus on regulatory reforms to ease investment and trade in the country, both exports and imports,” Bambang said, adding that the key is actually on the implementation of the reforms.

Furthermore, Bambang said that the Government will also focus on how to optimize economic growth to reach 5.4% by resolving issues on regulations and institutional factors (RSF/AGG/ES)