Compliment Student Achievers, President Jokowi: Being Rich of Natural Resources Does Not Guarantee A Nation Success 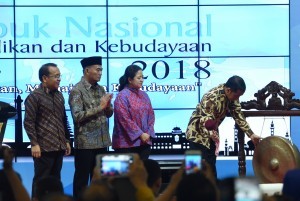 President Joko Jokowi Widodo stated, being rich in natural resources does not guarantee a nation to be successful. He exemplified, many developed countries have infertile land, no mining, no oil, and no gas.

In fact, being rich in natural resources would pamper us, cut off fighting spirit, make us weak, and does not stimulate innovation and creativity, the President said during a National Meeting (Rembuk Nasional) at the Ministry of Education and Culture Training Centre, in Bojongsari, Depok, West Java, on Tuesday (6/2) afternoon.

According to the President, the key to develop a country is human resources, and this is a great responsibility to Rembuk Nasional Board.

Here is the important role of building Pancasila (the Five Principles, the Indonesian State Ideology)s character through education which prioritise mutual interest and social solidarity, teaching honesty, togetherness, modesty, norms and manner to the children, the President added.

Here is the important role of education which develops fighting spirit, builds character, teaches independent learning with enthusiasm for innovation, the President added. These are our capital as a great nation that is able to solve problems among societies or regions and to win the global competitions in the future.

The Government, according to the President, has been working hard to improve education services, either in central, provinces, regions, or cities. The President noted Smart Indonesian Card (KIP) Program as a guarantee education access for underprivileged children.

Budget allocation from central to regional governments, the President added, continues to be increased and this also to improve teacher quality and education infrastructure.

However, President Jokowi persuaded all to break the routinity. For years, we go through the routinity without any revitalization nor great innovation in education and culture, he said.

On the occasion, President Jokowi conveyed his proud because Indonesian students are able to compete in the national or international competitions even they come from undeveloped region.

Not from Jakarta or from Bandung, for example Made Radikia Prasanta and Bagus Putu Satria Suarima, students from state vocational high school in Bali Province are not from a wealthy family but awarded a special award from American Meteorological Society on weather forecasting instrument the President mentioned.

These achievements should be announced and applauded so that our children are motivated to follow the success of students I have mentioned, the President stated.

On the same occasion, the Coordinating Minister for Human Development and Culture, Puan Maharani, in her remarks, said that the Meeting (RNPK) is central and regional governments commitment to improve education quality. The discussion will focus on national priority agenda such as Smart Indonesian Card, Puan said.

Accompanied the President on the occasion were Coordinating Minister for Human Development and Culture Puan Maharani, Minister of State Secretary Pratikno, and Minister of Education and Culture Muhadjir Effendy. (EN/OJI/ES) (EPI/YM/Naster)