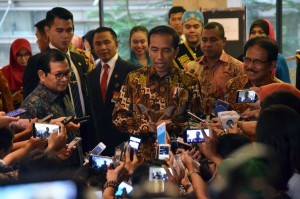 President Joko Jokowi Widodo believes that the ship-sinking policy conducted by Minister of Marine Affairs and Fisheries Susi Pudjiasti is for the good of the country as well as the people. However, the President also reminds the Minister to also concentrate on fish processing industry that will boost fish export.

The sinking is a form of law enforcement showing Indonesia takes a firm action against illegal fishing, the President tells the journalists after the Opening of National Working Meeting of Ministry of Agrarian and Spatial Planning/ National Land Agency of 2018, at Puri Agung Convention Hall, Sahid Jaya Hotel, Jakarta, Wednesday (10/1) afternoon.<>

Differences of opinion between Minister of Maritime Affairs Luhut B. Pandjaitan and Minister Susi Pudjiastuti on the sinking policy has created a polemic. Concerning this issue, President says that he supports all his ministers. Each minister has their own policies and they are for the good of all people, the President says.

The President asserts that the sinking of ships conducted by Minister Susi Pudjiastuti aims to act as a detterent effect. Nevertheless, the President also tells her to more concentrate on fish processing industry that will boost Indonesias fish export since our  export value declines. He also supports all efforts taken to increase fish production, both in capture fisheries and aquaculture, in Indonesia.