Condemns Terrorism in Paris, the Foreign Ministry Remind WNI Who Traveled to Europe to be Careful 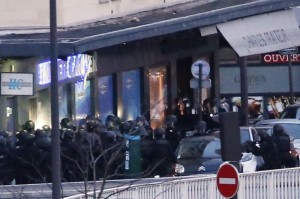 Condemns Terrorism in Paris, the Foreign Ministry Remind WNI Who Traveled to Europe to be Careful

The Government of the Republic of Indonesia through the Ministry of Foreign Affairs (FM), condemned the acts of terrorism in a grocery store Hyper Cache, in #Paris , France on Friday (9/1), which resulted in 5 (five) people were killed, including the perpetrator and 4 (four) the others were seriously injured.

“Indonesia condemned the acts of terrorism in Paris that killed four hostages,” the Foreign Ministry statement kultwit through the account @ Portal_Kemlu.

French police have taken action to stop the terrorist acts that occurred in the Jewish kosher grocery store (kosher) in Vicennes, Paris, and has lasted several hours on Friday (9/1).

The hostage takings at a grocery store was thought to be related to previous terror acts, which occurred in the office of the Charlie Hebdo magazine in Paris that killed 12 people, and the shooting of a policewoman and civil servants.

Related with the two acts of terrorism which occurred consecutively in Paris, France, the Ministry of Foreign Affairs gave a warning (travel warning) to Indonesian citizens (WNI) who are traveling to France or other European countries to be careful.

“WARNING to WNI, who will be traveling to France and other European countries: Carefully and quickly contact the Indonesian Embassy/Indonesian Representative nearby if anything happens,” the travel warning the Government of Indonesia, which was broadcast through the Ministry of Foreign Affairs web site (www.kemlu.go.id) and twitter account @Portal_Kemlu  in a few moments ago.

To WNI in France, the Foreign Ministry reminded to keep vigilant and contact the Indonesian Embassy  #Paris and  Indonesian Consulate General in Marseilles, if need help.

So far, according to the Foreign Ministry, based on confirmation by the Paris Police, none casualties of the WNI related acts of terrorism in Paris in the last three days. (ES)