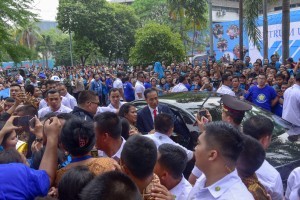 President Joko Jokowi Widodo explained the meaning of his speech about the Game of Thrones series, which he delivered at the opening of the IMF-World Bank Annual Meetings in Bali, on Friday (12/10) while attending the Indonesian Christian University (UKI) Senate Open Meeting in the Lustrum XIII concatenation, at UKI Campus, Cawang, Jakarta, Monday (15/10).

The moral message I wanted to convey at that time is that confrontation and disputes will only cause suffering, not only for the losers but also for the winners, President Jokowi said.

An elite country triumphs, while other countries are experiencing setbacks and destruction, the President said.

When these great powers are busy fighting each other, the President continued, they are not aware of  greater threats, such as climate change, global terrorism, and the global economic slowdown. Its very unfortunate if all of them are late to realize it. The winners and losers will only get a ravaged world, President Jokowi said.

The Head of State emphasized that we should not commit destruction only to obtain a victory because it will be meaningless if a victory celebrated in the midst of destruction.

The moral message he delivered in the speech in Bali, according to President Jokowi, was not only relevant to the current world leaders, but also to the people of Indonesia, especially the leaders in the country. He also mentioned that in the political years, we will all be involved in the process of political contestation.

Political contestation, President Jokowi continued, must not sacrifice our national foundation such as stability, security, tolerance, and unity. The President also urges the people to celebrate the fiesta of democracy with joy.

Our fiesta of democracy must be filled by soothing narratives and ideas for develop our country, President Jokowi said, adding that we also must celebrate our differences in choices with maturity and open hearts that will strengthen Bhinneka Tunggal Ika (unity in diversity, the national motto).