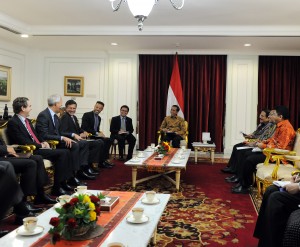 President Jokowi when received a number of US business leaders, in the office of President, Jakarta, Tuesday (5/5)

A number of corporate leaders from the United States (US) level of Chief Executive Officer (CEO) who joined in the US-ASEAN Business Council meet President Joko Widodo (Jokowi) at the Presidential Office, Jakarta, Tuesday (5/5).

Vice President for Policy, US-ASEAN Business Councilto reporters Marc Mealy said that the visit of US companies leaders to President Jokowi which is a series of visits to Indonesia, which was conducted for 2 (two) days, for the purpose of conducting business meetings with the Indonesian government, because Indonesia as one of the countries that will enter the ASEAN Economic Community (AEC).

“The meeting was an opportunity to share perspectives and ideas of both countries,” said Mealy while mentioning, many positive perspective views of the leaders the US firm against Indonesia, particularly related to cooperation between private companies.

According to Mealy, there is the potential for the public-private partnership to invest in basic sectors, particularly in public services such as infrastructure, power, health, and technology, and includes supporting the entrepreneurs in Indonesia.

Mealy recognized that the pace of the economy in many countries tend to slow down. However, US business still sees the potential to invest in Indonesia.

“Indonesia is a country that has enough potential to invest,” Mealy said.

During the meeting, President Jokowi also deliver a range of government policies, including on licensing reform, by opening one stop service through the office of the Investment Coordinating Board (BKPM), and also about diversion fuel price subsidies (BBM). (Humas Setkab/ES)