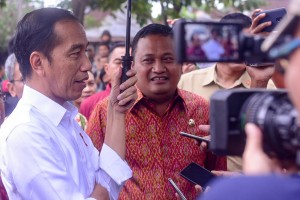 President Joko Jokowi Widodo has called on the public to respect legal process in Constitutional Court regarding the result of the 2019 Presidential Election.

In the meantime, Constitutional Court Justice I Dewa Gede Palguna asserted that the Panel of Judges would be independent and impartial in deciding every case.

“The independence and integrity of judges are the most important things. If the judge loses his independence, the authority of the Court will be lost,” Palguna said when inspecting facilities at the Plenary Session Room of the Constitutional Court, Jakarta, Thursday (13/6).

Palguna also invited the public to monitor the trial, the legal considerations and the court ruling. He added that everyone could monitor the trial process at the Constitutional Court through live streaming on the Court website, its youtube channel, video conferences in 42 universities throughout Indonesia, as well as on registered TV stations.

“Everything is accessible. We have implemented (the policy to open legal process to the public) in previous judicial reviews and we will implement the same (policy) in the Presidential election lawsuit,” he said. (AIT/AGG/ES)