Construction of Balikpapan-Samarinda Toll Road Will be Extended to Bontang 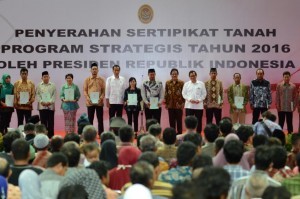 President Joko Jokowi Widodo wants construction of toll road connecting Balikpapan and Samarinda, East Kalimantan, can be finished by 2018. The President gave a signal that he approves the plan to connect the toll road with the construction of Samarinda-Bontang toll road.

Last night, I discussed Balikpapan-Samarinda toll road with Minister of Public Works and Public Housing. Land acquisition process is already finished by the Governor and the settlement is at ministerial level. It will be finished by the end of 2018, President Jokowi said in a remarks during the hand-over of land certificates of the 2016 strategic programs, on Monday (5/12) at Balikpapan Sport and Convention Center, Balikpapan, East Kalimantan.

Although the construction has not finished yet, the Governor of East Kalimantan Awang Farouk already requested that the road will be extended to include the construction of Samarinda-Bontang toll road. During our meeting last night, I gave my approval. Thus, the road to be constructed will connect Balikpapan and Bontang, Presdient Jokowi said to the applauds of the people attending the event.

The President then allowed his decision to be proceed and carried out. It could be conducted by having consortium with the available investors. However, the President reminded all that the Government wants the construction to be accelerated, so that the people can get the benefits. Once the road is finished, logictic cost will reduce, so does the price of basic commodities, and transportation cost. Eventually, the price of goods will be cheaper, the President added.

Also on that occasion, President Jokowi mentioned that the Govenment Regulation relating railways construction in Kalimantan is not yet finished. According to the President, that is the matter of administration and it takes time.

Regarding land certificate, the President explained that there are 120 million lands in Indonesia that need to be certified. On the contrary, the number of certified lands since Indonesian independence is only reached 46 millions. There are sixty percent of those to be certified, the President stated.

Therefore, President Jokowi admitted that he instructed the Minister of Agrarian and Spatial Planning to finish it immediately. Each year, not more than 50 thousand certificates being issued, but the President instructed the Government to finish 5 million land certificates next year, 7 million for the year after, and 9 million for two year after.  This is the task of Regional Land Registry Office, the President firmly said.

There is another complain, that we are lacking of 10,000 surveyors. The President then instructed the related agency to open new recruitment. Since the recruitment of surveyors from civil servant takes more time, according to the President, it does not need to be civil servants. Just holds a competency test and choose them based on the test results, the President asked.

On that occasion, President Jokowi instructed all officials in Regional Office of National Land Authority to give swift services to the people who need land sertificate. The President realized that once his instruction is delivered there will be complaints that they lack of land surveyors. However, the President warned all when it still takes quite time to issue one certificate or if the land authority officers still demand something to people even though the land surveyors are prepared.

I would like to thank you for working hard and providing the certificates.  I want services in all National Land Authority Office to be improved with a  good system, fast, and no illegal levies. That will make people happy, the President firmly said.

President Jokowi also left a message for those who possess land certificates to use it on productive sectors. It might become collateral to take loan in bank, but only for productive business. Do not use it as collateral to take loan to buy car or motorcycle. You may use it for business but you have to calculate the profit and loss. That what makes certificate important, President Jokowi said.

Besides it can be used as status of legal rights, land certificate can also be used as a collateral for banking activities. However, the President reminded all to be careful. If you want to take loan from bank, choose KUR (Smallholder Business Credits)  which interest is only 9 percent per year, the President added.