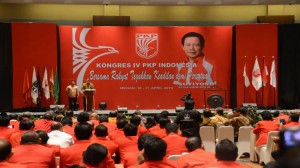 In a series of visits to North Sumatra, President Joko Widodo (Jokowi) opened the IV Congress of Indonesian Justice and Unity Party (PKPI), at the Hotel Santika Dyandra, Medan, Saturday (18/4) night at 20:00 pm.

In his speech when opening the congress, President Jokowi said that there are four (4) challenges now faced by Indonesia, namely;

The first is unemployment. “I think it can be seen on the screen, our unemployment in 2014 was approximately 7.2 million,” he said.

Third, President Jokowi said, our challenge is social inequality either rich or poor, and the gap region between western Indonesia and the eastern region. “There is a gap, socio-economic inequality is so huge,” he said.

Fourth, is the corruption problem. President Jokowi expressed, our corruption index in the ASEAN figure is still 34. Far behind Singapore, Malaysia, the Philippines, and to the other countries. “This is precisely what we have to face,” he said.

Those the problems that faced by Indonesian nation, the time when people want everything instantly, said President Jokowi. There are many who do not realize that the President and Vice President are just starting to work for 5-6 months.

President Jokowi conveys that the Revised State Budget just started brewing in mid-January. After the administrative process, the process of organizational consolidation and mid-April of this, we are just beginning to use.

The President reiterated that this year the government set a target that is not taken lightly, the economic growth from 5.7 to 5.8 percent, higher than the previous year’s growth of 5.1 percent. Whereas, other countries have lower economic growth target.

According to President Jokowi, if we saw before that the inflation in January-February, then deflation even minus. In March there was a bit of deflation, this is a reasonable calculation. President hopes by the end of this year that inflation is only approximately 4. He believes that we can, we keep about 4 percent, and then economic growth will be in the top 5.