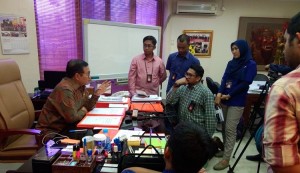 “If the President depart, he will also conveying the issues of peat land, that the burned not only the surface but actually inside. Even up to a depth of 20-30 meters, “said Pramono told reporters in his office, Building III Kemensetneg, Jakarta, Wednesday (26/11) afternoon.

According to the Cabinet Secretary, the world community should participate in thinking of peat fires in Indonesia’s forests, as they say as the lungs of the world.

Earlier in the G20 summit forum in Antalya, Turkey, President Jokowi asked developed countries gave the example and supports the reduction of carbon emissions in the world.

President hoped that the agreement resulted in the Paris meeting, at the end of November 2015 is ambitious, sustainable and fair.

President Jokowi said that the principle of “Common but Differentiated Responsibility ‘(CBDR) and” respective Capabilities “also must be respected in climate change treaty that to be agreed in Paris later.

To all heads of state, President Jokowi invited to give political support to the negotiators that the deal at COP21 could be achieved on time and promptly implement. (WID/DNS/ES)/Sy.