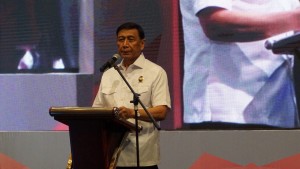 “Government Ministries/Agencies should provide the best personnel for CIQSN (Custom, Immigration, Quarantine, and Security) functions at the PLBN,” Wiranto said during the 2019 Coordination Meeting on State Border Management Control in Jakarta, Monday (28/1).

For the record, the Government is about to build eleven PLBN in 5 provinces, namely Riau Islands, West Kalimantan, North Kalimantan, East Nusa Tenggara, and Papua.

“With the end of the RPJMN (National Medium-Term Development Plan) and the State Border Management Master Plan for 2015-2019, the implementation of development activities at the border areas should be optimized in accordance with the 2019 National Border Action Plan and under the coordination of the National Agency for Border Management (BNPP),” Wiranto said.

Wiranto went on to say that the deployment of the Indonesian National Defense Forces (TNI) and the Indonesian National Police (Polri) to state border security posts should be supported by adequate facilities and infrastructure. He added that the Government agencies involved in securing border areas should improve their coordination and synergy, including the coordination among members of Regional Intelligence Community (Kominda) in an integrated manner to detect and prevent any threat.

“In an effort to uphold the sovereignty of the Unitary State of the Republic of Indonesia (NKRI), there is a need to continue the maintenance of border stones through IRM (investigation, refining, maintenance) and Pre-IRM activities. Then, in order to support efforts to set national borders, there is a need for an integrated management of documents and information of the borders,” Wiranto said.

In the meantime, Minister of Home Affairs Tjahjo Kumolo, who is also the Head of the BNPP, stated that the Government has issued Presidential Instruction (Inpres) Number 1 of 2019 on the Acceleration of the Development of 11 Integrated Cross-Border Posts (PLBN) and Supporting Infrastructure Facilities in Border Areas.

He asked Governors and Regents/Mayors in 5 Provinces to coordinate and provide facilities for the PLBN development, including coordination and land preparation, transfer or asset grants, accelerating licensing process, and providing facilitates of its development.