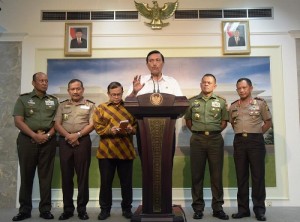 Coordinating Minister for Political, Legal and Security Affairs delivered a press statement after a limited meeting on Sarinah Assaults in Jakarta, 14 January 2016

Coordinating Minister for Political, Legal and Security Affairs Luhut B. Pandjaitan praised the work of police apparatus who quickly responded to the assault that occurred in Sarinah, Thamrin, Jakarta, on Thursday (14/1) afternoon.

If you see the process, it started at 10.30 a.m. and finished at 3 p.m. We also opened the roads and access at 3 p.m. What it means? The Police responded it rapidly, Luhut said to the reporters after a limited meeting at Presidential Office, Jakarta, on Thursday (14/1) afternoon.

Luhut said that he was on the phone with the Metro Jaya Regional Police Chief Ins. Gen. Tito Karnavian when Tito still received the reports saying there were several blasts. Hovewer it all solved quickly. Therefore, I called the Indonesian National Defence Forces (TNI) Commander to directly set it up.

The TNI quickly arrived at the scene. According to my opinion, this is one great measure. Honestly, we are deeply grieved with the incident, but it can not be avoided, Luhut said.

Regarding the impact of the assault, Luhut explained that from the economy, the market does not affected by the incident. It had briefly affected but it already went to the normal state. What it means? We have high confidence due to the fast response. In 4 hours, we already create a normal situation, Luhut said.

The Coordinating Minister for Political, Legal and Security Affairs hopes Starbucks can re-open tomorrow. Hopefully, all things could be fixed tonight. If not, we will wait several places only. However, Pak Tito has finished the crime scene investigation in only half or one hour, and everything goes well, Luhut added.

On the occasion, Minister Luhut B. Pandjaitan said we were actually already aware about this assault since December because his office got information from the intelligence service saying there would be an orchestra in Southeast Asia in December. Based on the information, the police worked very hard and arrested some suspects in December.

However, Luhut asserted that there is one thing that we could not guarantee: we do not know when and where the act will occur. It happens in every corner of the world too. We saw that what happened in USA, U.K, Paris, and Turkey can not be prevented, Luhut firmly said.

Therefore, Luhut does not want us to miss it once again. No! We already be aware of it and the President trully understands it because we inform the progress from time to time. Cooperation among the police, National Intelligence Agency (BIN), and the TNI is very good, Luhut said.

The Coordinating Minister for Political, Legal and Security Affairs also asked the mass media not to speculate. He asserted that there is no country that says this morning they already knew the assault will occur. Thus, I asked all not to create unnecessary uproar. We, the security forces, once again work professionally. Do not doubt the professionalism of the Police, BIN, and TNI, Luhut said. (UN/SLN/ES) (RAS/MMD/YM/Naster)