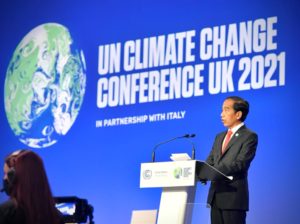 Not only that, he continued, Indonesia has also started the rehabilitation of mangrove forests covering an area of 600,000 hectares until 2024 – the largest in the world – and has also rehabilitated three million critical lands between 2010-2019.

“The sector, which originally contributed 60 percent of Indonesia’s emissions, will reach a carbon net sink by 2030,” he added.

President Jokowi went on to say that in the energy sector, Indonesia also continues the development of an electric car ecosystem and the construction of the largest solar power plant in Southeast Asia.

In addition, Indonesia, he added, is also utilizing new renewable energy, including biofuels, as well as developing clean energy-based industries, one of which is the construction of the world’s largest green industrial area in North Kalimantan province.

“However, it is not enough. Indonesia, as a country with large areas of green land and ocean that have the potential to contribute carbon, needs support and contributions from developed countries,” the President said.

The Head of State also ensured that Indonesia would continue to mobilize climate finance and innovative financing such as hybrid financing, green bonds and green sukuk.

According to President Jokowi, the climate finance with developed country partners is a game changer in mitigation and adaptation to the climate change in developing countries.

“Indonesia will be able to contribute more quickly to the world’s net-zero emissions. The question is, how big is the contribution of developed countries to us? What technology transfer can be provided? What programs are supported to achieve the SDGs targets that have been hampered by the pandemic?” he stated.

In addition, the President continued,  carbon market and carbon price must be part of efforts to address climate change.

A carbon economy ecosystem that is transparent and with integrity, inclusive and fair must be created, he added.

In his closing statement, on behalf of the Archipelago and Small Island State Forum (AIS), President Jokowi said that Indonesia was honored to circulate a joint statement with leaders of the AIS Forum.

“It is the AIS Forum’s commitment to continue to advance maritime cooperation and climate action at the UNFCCC,” he remarked. (BPMI/UN) (EST/EP)