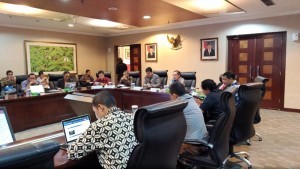 The National Corruption Survey in 2018 recorded that there are 4 (four) sectors in which its corruption or illegal levies dropped significantly, some of which have decreased to more than 50 percent.

In health sector, the number of complaints on payment outside official fees decreased from 14 percent in 2016 to 5 percent in 2018. Public administration sector also recorded a high decrease, from 30 percent to 17 percent. In education sector, the number decreased from 18 percent to 8 percent, while in police services the number dropped significantly from 60 percent to 34 percent in two years, Yanuar said in a discussion adopting a theme Corruption-Free Public Services, at Bina Graha Building, Jakarta, Wednesday (9/1).

The Deputy went on to say that he had met a victim of Lombok quake who was taken to a quack because the family is concerned about the hospital fee.

I took the person (to the hospital) along with the family. After receiving treatment, the hospital charged Rp0 since they have shown the Healthy Indonesia Card (KIS), Yanuar said.

Presidential Special Staff Johan Budi S.P who also attended the discussion said that there is no question that President Jokowi Widodo is committed in realizing a sense of justice in the community. The same thing also applied for corruption cases.

We can see the Presidents stance when there was attempt to weaken the Corruption Eradication Commission (KPK) authority. President has showed his firm action and commitment, Johan added.

In a bid to intensify efforts to prevent and eradicate corruption, the Government has issued Presidential Regulation Number 54 of 2018 on Corruption Prevention where five high-ranking government officials and ministries signed a Joint Decree which stipulated that 11 corruption prevention actions are aimed at improving the quality of public services.