Cost of Hajj Cheaper by 502 Dollars, the Government Promises to Improve Services 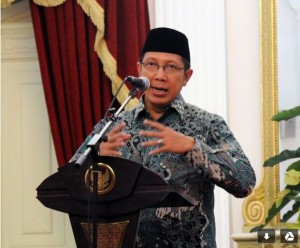 Minister of Religious Affairs, Lukman Hakim Saifuddin, who accompanied President Jokowi on the occasion warrant, although conducted an efficiency of 502 US dollars, the Ministry of Religious Affairs (MORA) will not reduce the quality of service that is rightfully of pilgrims. In fact, there is an increased quality of service, for example, during the stay in Mecca, all the pilgrims will get a meal in the form of catering, once a day for 15 days. “This had never happened and will be enforced starting in this year’s Haj,” he said.

The second is the provision of bus Solawat, buses that operate for 24 hours non-stop in Mecca in order to make it easier for Indonesian pilgrims who inhabit in the hotels outside of the radius of two kilometers from Masjidil Haram.

“It will be facilitated by buses which operates 24 hours, and is increasingly multiplied the number of the bus fleet and increasingly operationalized more effectively and efficiently,” said Lukman while mentioning, for this year centers of concentration of pilgrims in Mecca more scaled down, from the previous 12 (two twelve) region into 6 (six), so it will be more efisiens in catering distribution and in operating buses which work for 24 hours.

According to Minister of Religious Affairs, pilgrims waiting period are getting longer, because of the greater public interest and is not comparable with the Indonesian Hajj quota. Hence, the Ministry of Religious Affairs adopted a policy on Hajj, that Hajj really prioritized those who have never previously pilgrimage “That’s one way we shorten the queues,” he concluded. (Humas Setkab/Humas Kemenag/ES)