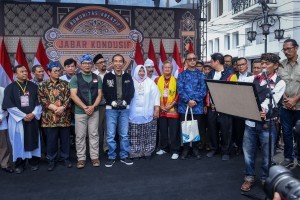 A total of 165 creative communities across West Java province on Sunday (11/11) made the declaration of Conducive West Java before President Joko Jokowi Widodo on historical Braga Road in the provinces capital Bandung.

In the event attended by a number of religious figures, the group stated that they will continue to keep and maintain a comfortable and safe atmosphere in the province for the unity of Indonesia.

This includes creating a free space for artists to do their creative works and to help the Government in running its programs smoothly for the sake of the country, said Budi Dalton, Chairman of the event committee, who also read out the declaration.

In the meantime, President Jokowi said that he welcomed the declaration because it is what all Indonesian citizens hope for: a united, harmonious, peaceful and conducive homeland with a diversity of ethnic groups, religions and regional languages.

Our nations greatest assets are unity and harmony. And I see that West Java Province in general and Bandung in particular will be the pioneer to create a conducive environment, President Jokowi said. (EN/AGG/ES)