Creative Economy Agency Can be A Ministry One Day 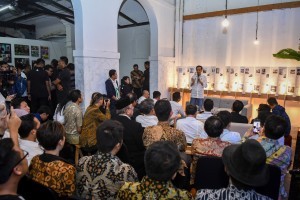 President Joko Jokowi Widodo asserted that Creative Economy Agency (Bekraf) might be upgraded into a ministry if the agency is always consistent with the programs that have been implemented, that will brand Indonesia as a strong creative country with famous designers and products.

Why did we established Bekraf in the first place? One of the reasons is to offer that opportunity. When the country needs a ministry, Bekraf might be turned into a ministry, President Jokowi said in a dialog with millennial creative industry players, in Braga, Bandung, West Java, Saturday (10/11).

However, President Jokowi told the players to differentiate Indonesian creative industry products with those from other countries for example Japan, Germany, or Korea.

Take South Korea, for instance, they are strong in entertainment and pop industry. Thus, we must try other sector. If we are consistent with our programs, Indonesia will be known as a country with strong creative industry, designers and products, the President added.

On that occasion, President Jokowi reminded the participants to step up from Micro, Small, and Medium Enterprises (MSMEs) level, particularly when applying for credit.

He added that the Government has provided Smallholder Business Credit (KUR) scheme for MSMEs with 7 percent interest. However, since plafond of the KUR is only Rp500 million, creative industry players who need capital loan of more than Rp500 million should step up from MSMEs level.

If you have exceed the limit of Rp500 million, commercial interest will apply when you can take loan of billions or even trillions. Do not take loan for MSMEs because the limit is under that amount, President Jokowi said adding that creative industry players whose businesses have grown rapidly should leave MSMEs level.

President Jokowi carried on that the Government is preparing a venture capital institution to back up the digital economy startups that have not been funded yet to make them leap to another level.

However, President Jokowi in that event also appreciated the fact that the country currently has four unicorns out of  7 unicorns in ASEAN (the Association of Southeast Asian Nations); Gojek, Traveloka, Bukalapak, and Tokopedia.

I am excited Gojek has expanded Vietnam, and to expand to the Philippines and Singapore, President Jokowi added.