Criticism Should be Motor to Improve, Cabinet Secretary Says 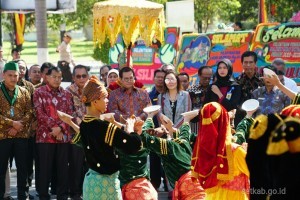 People will always criticize the Government no matter how great the Governments achievements are. It is because a state, whoever the head is, should be criticized, according to Cabinet Secretary Pramono Anung.

The Cabinet Secretary made the statement in his remarks at the Universitas Negeri Padang (Padang State University/UNP) to commemorate UNPs 64th Dies Natalis (anniversary) at the UNP Auditorium, West Sumatra Province, on Saturday (20/10).

The Government must not be allergic to criticism, even the harsh one, because criticism serves as a motor for the heads of the Government, Pramono said.

The Cabinet Secretary carried on that a government that never had criticisms will likely to act arbitrary and has an idea of predominant. And, when they do so, for example when regents and mayors think can rule as kings in regions, they forget how to properly run their governments, and it leads to corruption cases, Pramono added.

Therefore, Pramono asserted that the Government must make criticism a motivation to improve. He admitted that when Indonesia hosted the 2018 IMF  WBG Annual Meeting in Bali earlier this month, there were also some criticisms over the budged. Due to the criticism, the Government was very cautious in using the budget.

The Government was very cautious to the extent that they rent cars used by President of World Bank Group, and Managing Director of IMF because the Government should not waste the budget to buy new cars, the Cabinet Secretary explained.

However, Pramono reminded all that in this age of technology development, freedom of criticism must be guarded so it will not be excessive. The most important thing is that the criticism must base on facts.