Current Relations Among Advanced Countries Are Like Game of Thrones: President Jokowi 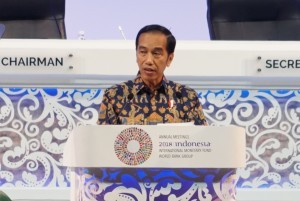 President Joko Jokowi Widodo said current relations among advanced countries have been increasingly like TV series Game of Thrones, where balance of power and alliances among them seems to be strained.

The lack of cooperation and coordination has led to many problems, such as the drastic hike in crude oil price and also disruption in currency market experienced by developing countries, President Jokowi said in his remarks at the opening of the IMF-World Bank Group Annual Meeting, Bali Nusa Dua Convention Center, Nusa Dua, Bali, Friday (12/10).

However, President Jokowi continued, they forget when those Great Houses are busy fighting each other, they are oblivious of a serious threat from the north, an Evil Winter, who aims to decimate and rule over the world with ice and.

The President went on say that with the fear of this Evil Winter threat, they are finally aware, it does not matter who sits on the Iron Throne.

The important thing is a collective power to overthrow the Evil Winter to prevent global disasters from happening and to prevent the world from turning into a barren and devastated land that brings misery for all of us, said President Jokowi.

President Jokowi quoted a statement by UN Secretary General Antonio Guterres, that the time has come for us to take action in a massive scale to prevent global destruction due to climate change that is out of control. Therefore, the President continued, we must work together to save our lives and we have to ask ourselves whether it is the right time for rivalry and competition.

Once again, is this the right time for rivalry and competition? Or is this the right time for collaboration and coordination? Are we too busy to compete and attack each other that we fall to be aware of big threats that shadow all of us? Have we failed to be aware of the big threats faced by rich countries and poor countries?  President Jokowi said in a questioning tone.

According to President Jokowi, next year we will watch the Season Finale of Game of Throne series, adding that he expressed belief that the story will end with a moral lesson that confrontation and disputes will bring suffering, not only for the losers but also for those the winners.

When victory is celebrated, and loss is lamented, do both parties realize that the outcome of both triumph and loss in a war will remain the same: a devastated world? said the President. He added that it is pointless to celebrate triumph amidst destruction, to be the biggest economic power amidst a sinking global economy.

The President emphasized that today we have entered the final session in the fight over the global economic expansion replete with rivalry and competition. He warned that the situation could be worse than the global financial crisis ten years ago.

We depend on all of you, global fiscal and monetary policy makers, to maintain the global cooperation commitment, President Jokowi said while expressing hope that the participants of the IMF-World Bank Group Annual Meeting will contribute in urging world leaders to appropriately respond to this situation.

The President also expressed hope this years Annual Meeting can be productive. I hope all of you can absorb the energy and be inspired by natural beauty in Bali and Indonesia, to produce clarity in heart and mind improving the global condition of global finance for the sake of our common good, President Jokowi concluded.