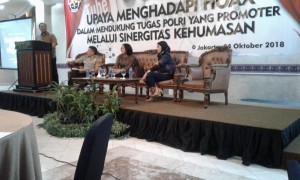 Chief of the Indonesian National Police (Kapolri) has established a new unit, Cyber Crime Directorate, to pursue the spreaders of fake news (hoax) that negatively affects society and can cause disintegration of the nation.

The statement was made by Head of the Public Relations Division of the Indonesian National Police (Polri) Inspector General of Police Drs. Setyo Wasisto, S.H. in his remarks at the Thematic Forum of the Government Public Relations Coordination Agency (Bakohumas) at Amos Cozy Hotel, South Jakarta, Thursday (4/10).

Deputy Director of Cyber ??Crime Directorate of the Indonesian National Police, Senior Police Commissioner Asep Safrudin said that the Directorate will look for the identity of online administrator and collect the information related to viral information in cyberspace. He then pointed to an example of disclosing fake news about the persecution of activist Ratna Sarumpaet.

“When the news circulated in media, we immediately check whether Mrs. Ratna was really on the reported place or not. It turned out that the news was fake news and we immediately disseminate the information to the mainstream media, ” Asep explained.

In the meantime, Director General of Public Information and Communication of Ministry of Communication and Informatics Rosarita Niken reminded that fake news is very dangerous for the nation. “The fake news consumes our energy. We are forced to change the positive energy into things that can divide the nation, “Niken said.

Niken further said that public relations officials have responsibility to disseminate the program and the achievement of the Government institutions to the people as well as to educate public.

Niken also explained that internet contains many good things but today almost 90% of the internet content is something related to radicalism, disintegration, or fake news. She expressed hope that all element of society must participate in eradicating fake news and prevent its spread.

On the occasion, she also gave some tips to avoid online piracy or hacking, by keeping personal account passwords with unusual characters.

“Do not use your birthday, your cellphone numbers or the things we often use as password, Niken concluded.