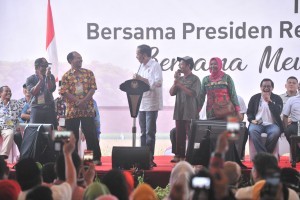 The main problem in agriculture sector is lack of water supply that happens in various regions, including Lampung Province, Nusa Tenggara Province and some others, President Joko Jokowi Widodo said at the Lampung Farmers Meeting in Pringsewu, Lampung Province, Saturday (24/11).

According to the President, Indonesia is a tropical country with abundant water resources but it lacks  reservoirs and dams.

Until 2014, the President continued, Indonesia only has 231 dams and reservoirs throughout the country. As comparison, China has 110,000 reservoirs, India has 1,500 reservoirs, the United States has 6,100 reservoirs and Japan has 3,000 reservoirs, respectively President Jokowi said, adding that the Government needs to provide water supply supported by irrigation system in order to improve agricultural sector.

Therefore, the Government is currently building 65 reservoirs throughout the country, the President added.

President Jokowi also appreciated the effort to build small ponds in the villages that can help to load water for irrigation.

In the meantime, the President also talked about village funds with a total amount of Rp 187 trillion that have been disbursed to villages and can be utilized to build roads, integrated health posts, early childhood educational schools, village markets, bridges, irrigation systems, ponds, clean water access as well as village-owned enterprises.

At the end of his remarks, the President invited the Governor, Regents, village officials, as well as the community to work hard together.

Only with hard work this country will be advanced and can compete with other countries, said the President.