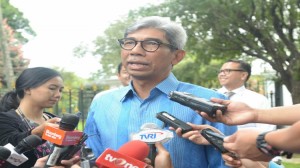 The Government of Indonesia hopes the Government of Australia could understand and comprehend, Indonesian policies relating to the execution of the death row inmates of drug (Narkoba), including the two Australians, Andrew Chan and Myuran Sukumaran.

“Of course we see that what is happening in the interests of our national, and we hope that Australia can understand,” Deputy Foreign Minister AM. Fachir told to reporters after a limited meeting on the preparation of the 60th Commemoration of the Asian-African Conference (KAA), in Bogor, West Java, on Tuesday (17/2).

As we know, following the Attorney General’s plan to carry out executions of death row of drug (Narkoba), including Andrew Chan and Myuran Sukumaran, Australian Prime Minister Tony Abbott has said that he will do a diplomatic reply in kind if Indonesia executes his citizens.

Abbott asserts, Australian citizen fed up with a plan of execution to be carried out by the Government of Indonesia against the two citizens, Andrew Chan and Myuran Sukumaran. Therefore, Australia will continue to press the Indonesian Government to annul the death penalty.

“We will look for ways against show our disapproval of this problem,” Abbott said, as reported by the Sydney Morning Herald, Sunday (15/2).

While the Australian Foreign Minister Julie Bishop also threatened to boycott Indonesia, including prohibits Australian citizens to visit the Bali Island, which is a favorite destination for Australian tourists in Indonesia.

Deputy Foreign Minister AM. Fachir admitted that he does not see the reaction of the Government of Australia related to the dead execution of two citizens who became the drug death row as a threat.

Fachir reminds that, regarding Australian tourists who will travel to Indonesia, is a matter of interest of people. However, according to Deputy Minister of Foreign Affairs, the Government of Indonesia has officially communicated with the Government of Australia related to the plan of the execution.

“We convey what our interests that Indonesia has been in the situation of drugs (Narkoba) emergency, considering that so many people who have become victims of drugs (Narkoba). For us this is a very serious crime, therefore we take such policy,” Fachir said.