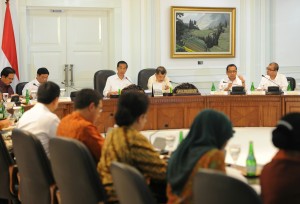 After making presidential visits for more than a week to the Peoples Republic of China (PRC), Myanmar, and Australia, President Joko Widodo (Jokowi) returned to Indonesia and resumed his official duties at home on Monday (17/11). Accompanied by Vice President Jusuf Kalla, President Jokowi led the Plenary Cabinet Meeting in the Presidential Office Jakarta on Monday afternoon (17/11).

We also discussed preparations for the 2018 Asian Games and several related matters which we will communicate later, President Jokowi said.

The cabinet meeting was declared closed. In the end of the meeting, a press conference was organized by appointed officials.

Previously in the meeting with the Chief Executive Officers (CEOs) who attended the Asia-Pacific Economic Cooperation (APEC) Summit in Beijing, PRC, on Monday (10/11), President Jokowi stated that the subsidies on fuel oil which have so far reached IDR 714 trillion in the last five years really burdened state budget very much. Jokowi considered that if compared with the budget for public health and infrastructures, the budget for subsidies on fuel oil was extravagantly huge.

President Jokowi was really afraid that the 2015 state budget which amounts to IDR 2019 trillion will not be sufficient to bring any significant changes if the subsidies on fuel oil are not re-allocated for more productive sectors.

President Jokowi mentioned that if no changes in the state budget are effected, more than half of our state money will be spent on the subsidies on fuel oil and on paying our foreign debts and their interests.

When opening the National Coordinating Meeting of the Working Cabinet in the State Palace Jakarta on Tuesday (4/11), President Jokowi instructed all governors to help greatly create conducive investment climate by, among others, establishing one stop services in every province and every regency.

Within three to six months ahead, President Jokowi said, all regions in Indonesia must have implemented the one stop service to process the applications for permits and licenses.

Dont think too long. Start soon. Many investors already want to invest in many regions. They often ask about electricity and we are seldom prepared, President Jokowi said.

As regards infrastructure development to help boost investment, President Jokowi expected the governors to feel free to telephone him directly.

Governors, regents, and mayors, President Jokowi said, must be willing to observe the fields directly, identify the problems, hear directly the aspirations of residents living in the vicinity of construction projects, and explain the importance of those projects to the residents.