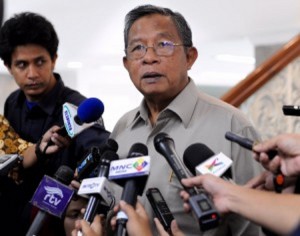 Coordinating Minister for the Economy Darmin Nasution admitted there is 0.05 % deflation in September 2015 as announced by the Central Statistics Agency (BPS) on Thursday (1/10).

However, Darmin asked all not to hasty indicated that the deflation is caused by the improvement in economy. Actually, it must be measured the reason behind the deflation, in one side it sounds good, but in other side the deflation indicates the demand in economy slows down, Darmin said on Thursday (1/10), at the Presidential Office, Jakarta.

Thus, deflation is a bad news when the demand slows down and good news is it means that our inflation increases severally due to food sector.

Therefore, the Coordinating Minister for the Economy Darmin Nasution reminded all the importance to study and watch this situation. We can not boast the news as an accomplishment, yet it is not a bad news either. So there are both possitive and negative sides, he said.

According to Suryamin, the deflation occurs due to the support from the regional inflation control teams (TPID) who worked optimally. It means in a general, inflation control in Indonesia is quite good, due to the support from TPID. TPID is needed because if inflation occurs or the price changes, purchasing power will boost, Suryamin said at the Headquarter of the Central Statistics Agency (BPS) on Thursday (1/10). (SLN/UN/DID/ES)(RAS/EP/YM/Naster)