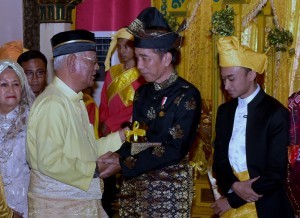 The President and his entourage were welcomed in the front yard of the Palace by His Majesty Sultan of Deli, His Excellency Regent of Deli, and Datuk from four tribes and also followed by Offering Dance.

The event, which lasted about 1.5 hours, started with a prayer recitation, reading the synopsis of the awarding title, and procession of the awarding of the customary title by His Majesty Sultan of Deli Mas Tuanku Mahmud Arya Lamanjiji Perkasa Alam to President Jokowi.

In his remarks, President Jokowi expressed his gratitude for the honor given by Deli Sultanate who awarded him the customary title. Deli Traditions is very noble, let’s preserve it together, President Jokowi said.

President Jokowi claimed that with the customary title, he felt there are duties and mandates given to him to realize the dream of Deli Sultanate and other national kingdoms to continue working hard together with all elements of the nation to lead Indonesia, to make Indonesia baldatun thoyyibatun wa robbun ghofur country (a prosperous country that is always blessed with Gods forgiveness).

Therefore, the President urged Deli Sultanate, national kingdoms, and all customary leaders throughout the nation to jointly promote Indonesian culture. We are wading through a long time journey with our cultural ship, President Jokowi said.