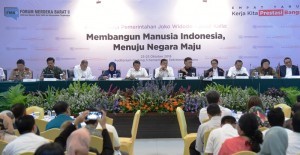 After declining in the period of 2015-2016, Indonesias democracy index showed an improvement in 2016 and 2017, but on the other hand, religious harmony index experienced a slight decline, the Government has announced.

Coordinating Minister for Political, Legal and Security Affairs Wiranto said that Indonesias democracy index in 2017 reached 72.11, improving from 2016 at 66.63.

It means that from around 26 indicators, the result showed that democracy in Indonesia is well developed and well maintained with stable political climate, Wiranto said during a press conference on a 4-Year Report of Joko Widodo-Jusuf  Kalla Administration, in Jakarta, Thursday (25/10).

One of the indicators is simultaneous regional elections in a number of regions in the country, which involved religious symbols or issues during the contestation, as well as the growing number of hoax news that triggered conflicts among citizens, he said.

We cannot avoid hoax but we can prevent its massive spread to maintain national stability, Wiranto said, adding that the index decline had yet to significantly affect Indonesias harmony as a nation.

The FKUB has been able to become an effective  to improve inter-religious dialog and to suppress conflicts in many religious activities, Wiranto concluded. (MAY / DNS / ES)